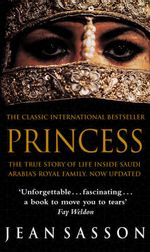 It is difficult to appreciate the privileges that we have until we acknowledge the cruelty around the world. I am ashamed to say that i never understood the terror anyone went through until reading this book.

Princess by Jean Sasson – This book is one of the most compelling books that has been released so far… This is based on a true story of a Saudi princess who has been hiding under the veil her whole life and finally decided the world had to know the pain and agony the women in Saudi go through. When you read through the book there are times where a normal human being who has been sheilded by such horrific stories would look up in horror.. do things like this happen in this world? Alas it is true.. this book is quite a old book… when i was in school Princess was my first book in this genre. I read it and was immediately swept away by the attrocities that surround most women. Rich they are but money comes with a price to pay. The way the author portrays each character and the way she unfolds the story will keep anyone captivated and make it a point to follow princess sultanas life..

Its hard for me to imagine that men like that exist in this world.. but the more i educate myself on this i realise that most men of that religion.. most men who live in countries and believe women should hide behind a veil.. women are only good to make children and do their bidding and give them sex,.. are just pathetic animals.. They are the same kind that hide behind God and justify each and every one of their actions as sacred. They should be firstly tested. I recently read a paper article of a 8 year old girl who was amrried off to a 60 year old man… and the thing was the socienty in Saudi agreed to that marriage.. and the courts refused to let them divorce no matter who appealed.. thanks to international intervention they were divorced.. and good riddance to bad rubbish i say…. These are the kinds of stories the author highlights in all her books… speacially in the Princess trilogy… so i would recommend anyone to buy this book and read it…. it will be a definite eye opener..